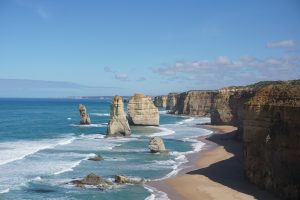 I first went to Australia when I was nineteen. It made complete sense. I’d been surfing and watching Neighbours since I was eight and most of my friends already called me Cazza, so when I discovered that my university offered the chance to spend six months studying abroad in another country, there was no way I wasn’t going to apply to go to Australia.

You had to write an essay about why you wanted to go, how it would enhance your studies and what you would do to ensure that you represented the UK in a positive way. I stayed up all night, pouring enthusiasm and professionalism into my essay, only to discover that the International Department weren’t actually going to read the essays, instead they stuck them all in a proverbial hat and took one out at random. It wasn’t mine.

I summoned up all my courage and went to complain. What was the point of making everyone write an essay if the end result was only going to come down to luck? Back then I had no idea that grown ups often don’t have a clue about what they’re doing and that some of them have fallen into jobs they’re not very good at. I assumed that the person in charge of arranging international exchanges did the job because he liked it, and was good at it. I quickly discovered that neither of these assumptions were true. His Adam’s apple bobbed about nervously in his throat, as he immediately agreed with me that my essay was by far the best, and of course I deserved to go. He said he’d see what he could do and let me know.

I waited nervously, and spent an agonizing week checking my emails obsessively which in those days meant going to the university library, climbing two flights of stairs and queuing up for a computer, not taking your phone out of your pocket to look at your email every five minutes. After hearing nothing, I summoned up more courage and went to visit the International Department again. The Adam’s apple guy had left suddenly. A stressed lady with cool hair explained she was in charge of the exchanges now and needed everyone to bear with her whilst she got to grips with it.

Back then I played everything entirely by the rules and hadn’t yet learnt to “blag it”. I didn’t want to admit to this lady that her predecessor hadn’t actually confirmed whether or not I was going in case she took that as an opportunity to strike my name off of her long list of things to do. I wasn’t sure how long it was going to take this lady to get to grips with her new role, but I was sure it was going to be longer than my nerves could handle. So I timidly enquired as to whether she could confirm that I was still definitely going to Australia – inserting that little word “still” to suggest that the place had already been confirmed – I wasn’t a student of English Language and Linguistics for nothing.

“Of course you’re going,” she said. “I’ve read your essay. You’re exactly the sort of person we should be sending on these exchanges. There’s going to be no more pulling names out of hats and sending people who clearly don’t deserve it. Things are definitely going to be changing around here.”

Things probably did change, because a month later the stressed lady with the cool hair also left suddenly – but not before she had confirmed my place at Deakin University in Geelong, Australia.

I arrived on Valentine’s Day in 2001 – quite fitting seeing as I was about to fall in love with the country I’d always dreamed of. Unlike my home university, the International Department at Deakin were totally amazing. They had invited all the exchange students to arrive a week early so that we could have our own orientation before the Australian students arrived on campus. Orientation involved being bundled on a bus each day and driven to have a look at amazing local beaches, then in the evenings going to pubs and parties with students from America, Canada, Holland and France, some of whom I’m still in touch with today.

Who knows what happened to the person who originally had their name pulled out of that hat, because I was the only British student living on campus. Which I loved. I was far too innocent to take advantage of all the attention I was getting from all the guys who loved my accent, nevertheless I was having a great time and making lots of friends. I loved my lectures, I loved my new flat mates and I loved everything about being a student in Australia. Everyone knew who I was because I was the only Brit. A couple of girls wanted to be my friend purely because of my nationality, and a girl from China who seemed to think England was just one tiny village found it hard to understand why I didn’t know her penpal Sarah who lived in Liverpool.

Everyone on campus had their own landline, and there was a directory with all our extension numbers in it. One morning I was awoken from my slumber at 6:48 by the telephone ringing. “Hello?” I mumbled, assuming it was a friend or relation from England who’d messed up on the time difference front.

“Do you think the monarchy will still be around in fifty years time?” enquired a voice, like some kind of abrupt telemarketing survey.

“Do you think the monarchy will still be around in fifty years time?” repeated the voice. “And what can the royals do to remain relevant to the Australian people in future generations?”

Apparently it was Bec. Which left me none the wiser as there were many Becs on campus, all of them knew me because I was the only Brit, but that didn’t mean I was familiar with any of them. Anyway, this particular Bec was pulling an all-nighter, she had an essay due and seeing as she hadn’t been doing her background reading or paying enough attention in class, she thought that the best thing to do was call up the bonafido pommy chick living on campus and quiz her about the state of the British monarchy. As I had been out dancing the previous night like all good students do, I can’t imagine that Bec got a very good grade based on any of the suggestions I made for her essay.

I fared a lot better in my own studies, taking modules in Journalism and Australian Studies, all the while collecting samples for my final year dissertation on the differences between British English and Australian English. Collecting samples, was just a posh way of saying that every time a flat mate laughed at me – for saying sellotape instead of sticky tape, duvet instead of doona, or for the way I pronounced yoghurt, I’d write it down. And everytime they said something I didn’t understand I’d write that down too. Considering how much I loved words and language, it was more like fun than a form of studying.

I lived on campus for five months, fitting a bit of travel in between my studies and my social life. Luckily I had made friends with some lovely Americans who were far more proactive than me in their quest to “do Australia”, they put lots of time and effort into researching the best trips, and I simply had to turn up and enjoy a whistlestop tour of Tasmania or a day of swimming with dolphins.

After the studies it was time to go travelling and my Mum and Dad flew out to travel with me. I loved introducing them to my friends and the Australian way of life.

If I hadn’t had to go back to England to complete my final year of uni, and if I hadn’t had my parents there to prise me away from my Australian life and make sure I got on the plane, I’m not sure I would ever have left.

But I always knew that one day I’d be back.