Whether we were for it or against it, Friday was the day that our not so united kingdom was supposed to exit the European Union. Like a less entertaining version of the Ross and Rachel “Will they, won’t they?” storyline in Friends, audiences from around the world have been waiting to see whether or not the UK really would part ways with the EU on 29th March.

However, one linguist from North Devon has always known that Brexit was never going to happen on 29th March for the very simple reason that it is not considered a proper word by people who play Scrabble. 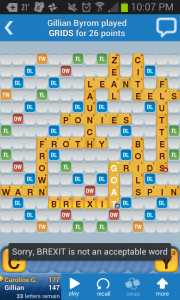 Caroline Gough, who enjoys playing real Scrabble at a table, and Words with Friends on her phone, attempted to play “Brexit” against her mother Gillian Byrom back in July 2018. “I’m always excited to see what I can do with high scoring letters such as J, Q, X and Z,” explained Caroline. “And when I realised I had all the letters for Brexit, I was thrilled.”

Caroline’s delight was short-lived however when Words With Friends informed her that “Brexit is not an acceptable word.”

Caroline said “When I learnt to play Scrabble back in the eighties, there were lots of strict rules about which words were and weren’t acceptable in a game of Scrabble. Proper nouns and slang were completely out, and in 1996 there was a huge family argument because my Mum put CHIMP on a Triple Word Score and Great Aunt Rosemary stormed out of the dining room because it’s a shortened version of CHIMPANZEE.”

However the online versions of Scrabble and Words With Friends allow all sorts of words that Scrabble purists would forbid, including acronyms such as FE (further education), colloquialisms such as GAWSY and proper nouns such as PARIS.

Caroline said “You can have ZAX which is a tool that punches holes in roof slate, you can have XI which is the 14th letter of the Greek alphabet and you can have EL which means an Elevated Railway, particularly in Chicago. You can’t have NARNIA or HOGWARTS presumably because these are things that exist in the realms of fantasy. It appears that BREXIT falls into the same category. Perhaps Theresa May should visit Scrabble HQ before her next vote and convince them that BREXIT is a real word. Then she may have a bit more luck passing it through the Commons.”

2 thoughts on “EXCLUSIVE: Brexit can’t happen because it’s not a real word”