It’s been four weeks since I posted my last story and I’m sure you’ve all been on tenterhooks. No time to spend thinking about Brexit or General Elections or whether or not to sit at home with the lights off ignoring the trick or treaters for Hallowe’en, not when I left you all with the very dramatic cliffhanger of whether I would come back to England and face the Evil Contents of the Renault Clio, or simply stay in Lanzarote, cartwheeling in the sunshine and rewriting the script for the Sun Safe rep in the hope that she might be able to make a sale before we enter the next decade.

I can now confirm that yes, I’m back in England. I was the last person to board the plane in Lanzarote, and the last passenger to get off it when we landed in Exeter. I even stood in baggage claims for a while and let my stripy suitcase do a few extra laps of the carousel, just to put off the inevitable moment when I had to leave the airport and collect my car. But in the end I could delay it no longer, and off we went for the big smelly reunion. The Renault Clio had indeed been festering in nasty juices for a week, with several nasty splodges that we’d missed in the dark, and so we thanked technology for inventing Google Maps and pointed the car in the direction of the nearest valet company where some poor teenager got lumbered with the job of making my car sparkly clean again.

“Is it generally quite clean?” he asked, because it seemed that his pricing strategy involved asking the customer how clean or dirty they thought their car was and then plucking a  round number out of the air rather than taking a look and judging for himself.

“Um… the backseat’s not too bad,” I replied, and so he got to work.

The car sparkled and smelt beautiful for the journey from Exeter back to North Devon, but when I climbed in to go to work the next day, the sparkly smell had disappeared, and I was worried that my car would be known forevermore as “The Sickmobile”. Thankfully the smell has gone now, or perhaps I’ve just got used to it.

The drama isn’t over though. The day after I got the car valeted, a picture of a space hopper appeared on my dashboard, which sounds like it could be fun, but in car terms it means that the teenager was so enthusiastic about valeting my car that he’s messed up the airbag mechanism and now I’ve got to pay to get it fixed.

Also, as a result of either my violent vomiting or his vigorous valeting, the temperature control now only works when it’s switched to odd numbers. Before sickgate I was able to turn it up to number 4 which was incredibly useful for blasting out enough cold air to completely dry my hair on the 20 minute journey to work. Unfortunately numbers 1 and 3 aren’t nearly as powerful, so I was arriving at work with wet hair every day and have now started showering in the evenings instead. Who knew throwing up in your car could lead to such huge lifestyle changes?

I went to the garage to tell them that my heater no longer works as a hairdryer, and that there was a picture of a space hopper on my dashboard. Obviously I’m not fluent in garagespeak, but I’ve now learnt that there are mechanisms inside the seats of my car that are linked to the airbags and if those mechanisms get wet then the space hopper picture appears on your dashboard and you instantly fail your MOT.

Who knew? I thought the seats were just there to be sat on, but now I discover they’ve been multi-tasking all these years. And considering how often I have driven back from the beach in my wetsuit over the years, I can’t believe it took a valeting teenager to make the seat wet enough to cause this malfunction and not me.

Considering the mechanic was completely bald, he was quite sympathetic to my hair drying issues, nevertheless we decided that having a heater that only works on odd numbers isn’t really the end of the world and we would just concentrate on fixing the space hopper. And so the Renault Clio went into the garage on Friday.

When I went to collect it on Friday afternoon, I nodded and smiled as a different mechanic – this one had quite a lot of hair – spoke to me about resistors and other such curious words, then only make sense if you can speak garage. Then I realised that he was talking about the number two setting on the heater which didn’t make a lot of sense when the bald mechanic and I had agreed that we weren’t going to bother reinstalling the even numbers and that we would only concentrate on removing the space hopper picture from the dashboard.

After I felt I’d done enough polite nodding, I casually asked:”And what about the air bag?”

“The air bag?” he says, as if nobody had ever mentioned the air bag to him before.

“Yes,” I said. “That’s what I thought you were doing today. Look there’s a picture of a space hopper on the dashboard.”

“I know,” I said, not feeling ever so pleased that for once I was ahead of the game when talking to a mechanic. “That’s what I thought you were fixing. Not the heater.”

The man went to get to get his iPad. It’s magic, because you just have to sit in the car with this iPad and it scans the car and tells you all sorts of clever things, that once upon a time you probably only found out by getting your hands dirty and taking the car apart. Last week when I took the car in for the space hopper assessment I was very impressed. This time it felt less magical.

“I need to find out which air bag it is,” said the mechanic.

The mechanic ignored me, then three minutes later informed me that the air bag problem was in the driver’s seat and that I’d need to bring the car in to get it sorted.

Which is what I thought I was doing when I dropped it off earlier that day.

So to recount… the sick smell has gone, the space hopper picture is still there. The heater now works on number 2 as well as numbers 1 and 3, but it still doesn’t work on number 4, so I still can’t dry my hair on the way to work and have to shower in the evenings. The jury is still out on how much I’m going to have to pay for the not exactly useful reacquisition of number 2 on the heater.

As an added bonus, following the Renault Clio’s day trip to the garage, it has developed the hugely annoying habit of automatically switching the headlights on as soon as it thinks it’s dark. I am not allowed to override this, and the only way I can turn off the lights is by switching off the engine. Which if you’ll excuse the pun is driving me crazy because I live in Georgeham.

If you live in Georgeham, or any other far flung village that is only accessible by very narrow single track roads, you will know that when a car comes towards you, one of you will have to reverse back into a passing place to let the other car go by. The car that doesn’t have to reverse expresses its gratitude by saying thank you. If it’s light enough, the driver will wave to say thank you, but if it’s dark, you have to say thank you by using your lights. Some people flick their headlights onto full beam to say thanks, this generally dazzles the other driver and makes them swear profusely. Other people drive past without saying thanks which also makes the other driver swear profusely. The only way you won’t get sworn at is if you say thank you by dipping your headlights. But the Renault Clio won’t let me dip my headlights any more so no doubt all the other drivers are now swearing at me, as I either blind them with my full beam or wave at them in the dark even though I know they can’t see me.

“How curious,” said the bald mechanic when I told him of this unexpected additional drama. “I don’t know how that happened.”

So as a result of being sick in my car over a month ago, I can’t have a shower in the morning, I’ve got a dodgy airbag that still needs fixing, and every driver who reverses for me in the dark is now swearing at me because I can’t say thank you. The car is going back into the garage next week but I’m not confident that the lights and air bag will be fixed, I’m pretty sure they’re more likely to spray it red and retune all the radio stations to Radio Cymru instead.

Meanwhile Grannie’s tartan picnic blanket, which you may remember landed the unfortunate job of cleaning up all the sick, is hanging sadly on the washing line, and there it will stay until at least next April. It stares at me disapprovingly every time I open or close the curtains, and all this torrential rain we’ve been having has done nothing towards removing the layer of cannelloni it acquired on that fateful nocturnal journey, although it’s possible that a couple of birds may have given it a go. 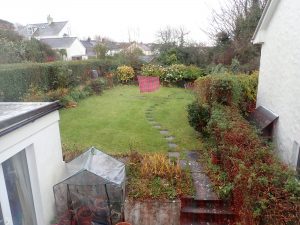 The suntan is fading, the summer clothes have been washed and packed away until next year, but the consequences of that dramatic journey to the airport seem to be never ending. I’m flying out of Exeter again in a couple of weeks time but I haven’t told the Renault Clio yet, I can never seem to find the right moment.

Still, at least this time I’ll know to take lots of sick bags.

7 thoughts on “After the holiday”