A nocturnal pair from North Devon were crowned winners this weekend after the Linguistic Board of Cazmania unanimously declared them to be top of the leader board in the category of “Most Unexpected Sentence of the Week.”

Tinska Octavia Gough, and her owner Caroline both have naturally nocturnal body clocks, and they regularly stay up late even on a school night.

“Usually we watch TV together, scamper about in the hallway, eat strawberries, the usual sort of thing,” explained Tinska. “Then she goes to bed and I run in my wheel and check that there are no predators in my tunnels, not that I actually know what a predator is. Our usual activities would never win us any sort of linguistic award.”

But things took an unexpected turn on Friday night when Tinska’s uterus fell out.

“We watched that incredibly underwhelming football match between England and Scotland just because we thought we should,” said Tinska, who is happy to support England, even though she is of Syrian descent. “And then suddenly Caroline was frantically typing things into Google because she noticed that there was this bright pink thing hanging out of my vagina.”

Following a phone call to the 24 hour vet, Caroline and Tinska quickly got into the car and set off for Roundswell.

“That was exciting,” said Tinska. “What with this pandemic, neither of us have been as far as Roundswell since 2019. I ran in my wheel all the way just to help the car go that little bit faster.”

Luckily the vet was able to pop the uterus back in and everyone is very much hoping that it won’t pop back out again.

“Tinska has brought a whole new meaning to the phrase ‘just popping out for a bit'” remarked Caroline.

A spokesperson for the Linguistic Board of Cazmania, which monitors all verbal and written communication said: “Never in the whole history of the question ‘How are you?’ has anyone ever responded with a comment about their hamster’s uterus before. The board were impressed with the originality and uniqueness of the What’sApp message and would like to wish Tinska and her uterus all the best for the future.” 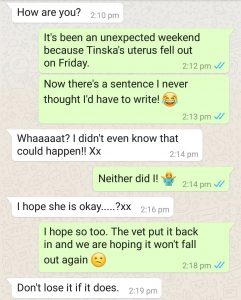