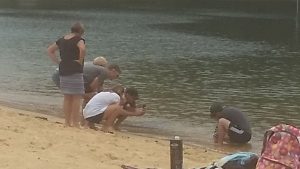 A baby’s first time in the sea has been well and truly documented as a group of people gathered around the baby, each taking several identical photos.

The group then headed up the beach and got into their vehicles, leaving as quickly as they arrived.

Onlooker Caroline Gough said “I’ve never seen anything quite like it. That baby will look at that photo in years to come and assume that it was taken during a wonderful day at the beach. He’ll have no idea that he was quickly marched down to the water, dipped in the sea and then strapped back up in his car seat within five minutes.”