An Australian family have been providing a constant stream of entertainment at a popular Queensland beach today. 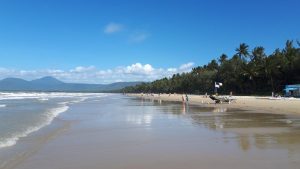 Whilst all five members of the family gave a convincing performance at Four Mile Beach in Port Douglas, the show was undoubtedly stolen by the Mum and the Dad whose comic double act was very much at the centre of the piece.

Theatre-goer Caroline Gough told us “The performance had already begun by the time I arrived at the beach, but I was still able to get a good spot fairly close to the action.”

Both arguments ended when the eldest daughter noticed that the toddler had removed his nappy and was doing some sensory play with the contents. “That was a real crescendo of the piece,” said Caroline. “Everyone started shouting. It was really quite dramatic.”

The mother immediately grabbed the toddler and began to clean and change him, placing all the dirty wipes in the pink mermaid bucket. “This united the two children who had been fighting about the bucket,” said Caroline. “They forgot they’d been fighting with each other and immediately both started to scream at their mother for ruining the bucket.”

It then transpired that the family had forgotten to bring several essential items to the beach including enough wet wipes and clothes for a toilet training toddler. “There was a very well scripted argument between the parents about whose fault that was,” said Caroline. “And the Dad ended up going home to get all the things they’d forgotten. Everyone in the audience could clearly see that he was the wrong person to send and we were right – he returned twenty minutes later with none of the things he was supposed to get, instead he had brought a whole new family with him.”

These extra characters brought new energy to the piece and really highlighted the divide between the Mum and Dad. “The Dad was clearly thrilled to have bumped into a mate and his two sons,” said Caroline “whilst the Mum was absolutely furious to have three unexpected people join their family beach trip.”

The two boys immediately started doing a lot of digging with their giant spades, sending sand flying in all directions. Several of the audience members closest to the stage also got covered in sand which really made them feel involved in the performance.

The Mum and the Dad then performed another realistic show-down about the lack of clothes and wet wipes. “The Dad started playing up because his mate was there,” said Caroline. “He kind of adopted a teenage swagger and said that a toddler on the beach on a hot day doesn’t need clothes or wetwipes because he can run around naked and be washed in the sea. This made the Mum really angry and she let rip with a whole string of rude words. The producers should probably look at classifying future performances as being suitable for mature audiences only.”

Even when it was time for the interval, the families remained in character as they ate their interval ice creams. “The toddler’s ice lolly ended up in the sand almost immediately,” said Caroline. “So he was screaming, and the Mum was shouting at the Dad for not helping the toddler hold the ice lolly.”

The younger sister instantly regretted choosing a rainbow paddle pop and delivered a loud and emotional monologue about how she wanted a chocolate one like her sister. Meanwhile the eldest brother made a crude innuendo about his brother’s choice of a Golden Gaytime (a popular Australian ice cream) so the youngest brother swiped the eldest brother’s ice cream onto the sand and stormed off in a rage.

The second act saw the two Dads working together to build a giant sandcastle but refusing to let any of the children help because they might ruin it. The four eldest children had a lot of fun playing together in a giant inflatable tyre in the sea but none of them thought it was their responsibility to bring the tyre back up the beach after they had finished with it so the Mum ended up going for an angry and lengthy run to retrieve it as a gust of wind blew it along the shoreline.

The performance ended with the Mum performing a monologue about how everyone and everything was covered in sand and nobody would be allowed in the car until they were clean. “She was fighting a losing battle,” said Caroline “because nobody else wanted to leave the beach so they didn’t exactly rush to get clean.”

It is believed that similar performances are being staged at popular beaches all over the world.

Caroline said “It was a very action packed piece of drama and very well cast. Even the toddler remained in character throughout the performance.”

Caroline who has over thirty years experience of attending professional shows in London’s West End said “This was one of the most realistic pieces of theatre I’ve seen in a long time.”