A British backpacker has been denied the opportunity to sample a delicious cocktail in Sydney this evening. 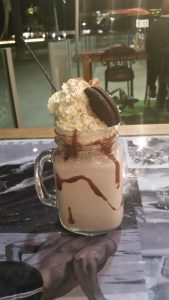 37 year old Caroline Gough explained: “When you’re backpacking, you meet all sorts of people and tonight I ended up going for a meal at Circular Quay with my newest friend Lisa from Switzerland.”

Lisa ordered wine with her meal and the waiter asked to see her ID.

“Lisa immediately got out her passport,” said Caroline. “But as soon as the waiter disappeared from earshot, she started to complain that now she’s nineteen, she really would have thought people would have stopped ID-ing her by now.”

Caroline who was ID’d just last summer when she attempted to buy BBQ lighter fluid said “Are you kidding? Being ID’d was part of the natural process of buying a drink until I was at least 31.”

Caroline who had so far not been asked to prove how old she is at any point during her eight month adventure down under then attempted to order a cocktail. “It was basically an alcoholic chocolate milkshake,” said Caroline “and it came with a chocolate biscuit and a sparkler so I was feeling pretty excited about that.”

However the waiter then asked Caroline for some ID. “I suppose because my friend was nineteen, he thought I might also be young. Plus I had my hair in plaits which probably didn’t help.”

Caroline was unable to provide any form of identification. “In England I carry around a huge wallet which seems to be a breeding ground for loyalty cards and vouchers I never use, as well as containing ID in the form of my driving licence. But in Australia my purse is a fish and I carry very little in it.”

Caroline said “It’s ironic. I’ve been old enough to drink alcohol since before Lisa was even born. Yet tonight she was allowed to drink and I wasn’t. In the end I ordered a coke and pretended to be thrilled about that instead.”