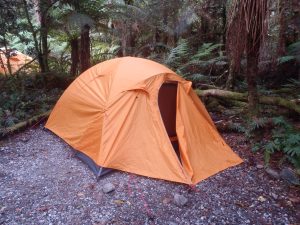 It has been confirmed that the girl sharing a tent with Caroline Gough tonight is going to be a complete pain in the backside for the duration of the two day Doubtful Sound camping and kayaking excursion.

When Caroline woke up in the early hours of this morning, she had not yet met her future tent mate, but had high hopes that she would be sharing her camping experience with a like-minded, fun-loving adventurous soul. Instead Caroline will be bedding down next to an annoying tourist who began displaying her annoying habits within three minutes of the trip commencing.

In an exclusive interview, Caroline told us: “This happens to me all the time. Because I’m friendly and smile at everyone, I attract a string of misfits who think I’m going to be their best friend. I’m travelling on my own because I want to and of course it’s nice to make friends along the way, but every time I go on a tour, other single travellers gravitate towards me and assume we’ll be spending the duration of the tour in each other’s pockets. After the disaster of Natascha on the Great Ocean Road, I promised myself that the next time an annoying person attached themselves to me, I would simply walk away from them, but that’s not possible when you have to share a tent.”

Caroline continued “There are sixteen people on this tour and we all quickly identified who the annoying one was going to be just from the way she said hello. Unfortunately her name is also Karoline, but with a K, so naturally everyone’s going to call us the two Carolines and assume that we are a pair. Nobody will realise that I find her just as annoying as they do and people may even believe that I am annoying just by association which will isolate me futher from the group.”

In a further blow, it emerged that Caroline would not only be spending her nights with Karoline, but also her days as Karoline had signed the two of them up to share a double kayak. Caroline said: ” It’s not fair. There are so many hot single men on this trip and I was really hoping to be paired with one of them. When the guide was pairing people up, I purposely stood far away from Karoline and was having a really nice chat with Todd from Oregan, so that it looked like we were together, but as soon as the guide started pairing people up, Karoline told him that she wanted to share with me.”

Karoline has proved herself to be as annoying on the water as she is on the shore. “We take it in turns to sit in the front and back,” Caroline explained. “This morning she sat in the front and thanks to the wind direction, I couldn’t hear what she was saying, so I could largely ignore her and enjoy my surroundings. But this afternoon she sat in the back where I’m sure she didn’t do any paddling and left it all to me. If you sit in the back you’re also in charge of steering the boat and every time we were paddling alongside another pair, I would be having a nice conversation with them and Karoline would suddenly change direction and we would veer off into the middle of the fjord so that we could no longer hear what the other pair were saying.”

Karoline with a K said “I was so happy to meet Caroline. It is just perfect that we have the same name and could share the tent and the kayak. Also what’s amazing is that in two weeks we will both be in Kaikoura so we can meet up again and have some more fun.
Caroline said “There’s no way I’ll be meeting up with Karoline when I’m in Kaikoura. It was a very rooky backpacker’s error to have disclosed the details of my itiniery to her.”