A poisonous snake on Magnetic Island has spoken of his disappointment as he once again fails to get a mention on any wildlife themed postcards of the island.

Speaking from his rainforest home on the island, the Death Adder said: “Year after year, it’s the same story. Cute little koalas, wallabies and colourful birds get their photographs splashed all over the front of the latest postcard, whilst I don’t even get a mention. Well I have to tell you, these animals may look cute and cuddly, but you try living with them. They’re messy eaters, they’re not toilet trained and they smell. The koalas are so lazy they only get up for about two hours a day. Apparently all of these animals are also very noisy but I don’t have ears so I can’t comment on that.”

The snake added “These postcards get sent all over the world, giving people who have never been to Australia a glimpse of  what life on Magnetic Island is like. There are people in England drinking tea and reading these postcards with no idea that I live here too. Just because some people might think my name sounds a little off-putting doesn’t mean I should be ostracized from every postcard about the island.”

The Death Adder was further aggrieved to learn that he is featured in a series of warning posters dotted around the island which describe him as being poisonous to humans. “It’s very hurtful,” he said. “Okay so I know I am one of the most venomous snakes in the world, but why do we have to focus on the negatives? What about the fact that I’m really great at camouflage or the time that I was crowned the winner of ‘who’s got the longest fangs in Australia?’ These posters make me feel like some kind of escaped convict, you know the ones that say highly dangerous, do not approach.” 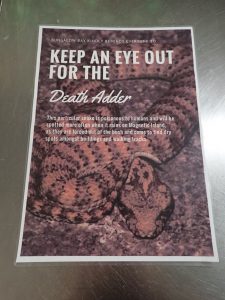 Although death adders are usually seen only when it has been raining, there was nevertheless a sighting of a death adder at the Bungalow Bay backpackers on Wednesday night. The hostel pub quiz was immediately brought to a prolonged halt whilst the staff guarded the snake and arranged for someone in a van to come and take it away.

“I’m not really sure where they were taking it,” said Caroline Gough, a British backpacker who was participating in the quiz at the time. “But I am fairly sure that the team who ended up winning the quiz used the ‘dealing with unexpected snake’ time to Google all the answers to the quiz. How else would anyone ever know that Frank Sinatra gave Marilyn Monroe a white poodle called Mafia or that Sandra Bullock’s middle name is Annette?”