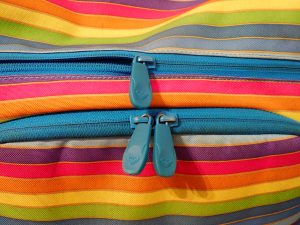 Hoards of backpackers are today stunned to discover that the sound of a zip being zipped up or unzipped in the darkness whilst other people are trying to sleep, is in fact, incredibly annoying.

Backpackers all over the world are travelling around, sleeping in multi-share rooms and carrying all their possessions in a large backpack or suitcase.

Caroline Gough who has been backpacking in Australia and New Zealand for the past seven months said “Most backpackers favour bags that have lots of different compartments so you can organise where you put different things. Each compartment is sealed with a zip. It seems that as soon as one backpacker turns off the light and tries to go to sleep, another backpacker will immediately decide it’s time to start rummaging in the darkness, zipping and unzipping every compartment of their bag several times until they have found whatever it is they are looking for.”

Caroline added “There are two different types of zippers. There is the Inconsiderate Zipper who will zip and unzip their bags a million times without any regard for their sleeping room mates. And then there is the Painfully Slow Zipper who is so aware of everyone else that they will undo their zip very slowly, trying to be as quiet as possible.”

Research has shown that both types of zippers are equally annoying.

It has also emerged that rustling plastic bags whilst people are sleeping is a similar source of annoyance.

Caroline said “Last night, someone arrived after midnight and began unpacking. I was initially quite pleased about this because I’m currently sharing with a couple who aren’t speaking to each other and I thought an extra room mate might dilute the atmosphere a bit.”

Caroline’s initial optimism turned to frustration however as the new room mate proceeded to unpack every item from their case. “It really isn’t necessary to unpack everything at quarter to one in the morning,” said Caroline. “Also it sounded as though every single item he or she unpacked had been placed in a separate plastic bag, so there was a lot of rustling as well as zipping and unzipping.”

However in an unexpected turn of events, Caroline was awoken once more at seven minutes past seven this morning to the sound of the new room mate carefully packing everything back into his or her case and then leaving the room. “There was at least half an hour of rustling and zipping as this person put everything back into plastic bags and repacked their case,” said Caroline. “Honestly, what’s the point? If you’re only going to be spending six hours in a room and be asleep for most of it, surely you don’t need to unpack anything?”

Further research has shown that earplugs are completely ineffective when a room mate is conducting a nocturnal orchestra involving plastic bags and zips.

Caroline remained diplomatic on the matter. “Zips are a fundamental part of backpacker life, there’s no getting away from them,” she said. “I guess the same could be said of annoying room mates.”

3 thoughts on “Zips are annoying, no matter how slowly you pull them, backpackers told.”