A rare New Zealand lizard has spoken of how difficult it has been to correctly learn his colours due to his misleading name.

Despite being a bright greenish yellow, the lizard which can only be found in New Zealand’s Northlands has been named “Grayii” since 1843. 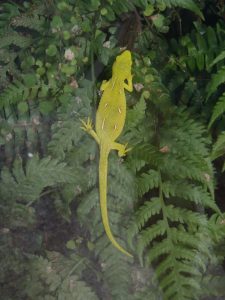 The lizard explained “I’ve got a few different names. My Latin name is Naultinus Grayii, my friends call me Grayii and in more formal situations it’s Gray’s Tree Gecko. Obviously when I reached the point in my education where it was time to start learning my colours I just assumed, quite reasonably, that ‘grey’ would be the same colour as my body, because why else would everyone call me Grayii? Discovering that I’m not grey at all, but on the cusp of yellow and green was actually quite mind-blowing. It took me a long time to adjust to that.”

“It’s alright for them,” said the lizard. “Herons, herrings and whales do tend to be predominantly grey, so that isn’t going to cause any confusion for anyone. But now that I have learnt my colours, I know that there is nothing remotely grey about me. It would have been far easier if I’d been named Naultinus Greenii. Green is a very common surname. Surely back in 1843 there were enough Mr. Greens walking the earth that at least one of them would have been worthy enough to have a lizard named after him?”

The lizard has been in contact with a green, black and yellow Mexican turtle called Trachemys venusta grayi. “Together we plan to set up an international support group for animals that have been named irresponsibly.”