A set of clothes are enjoying the opportunity to hang in the wardrobe and have a good stretch for the first time since they arrived in New Zealand. 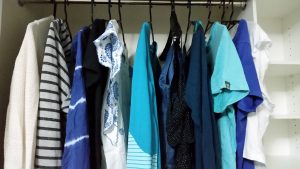 The clothes, which spend the majority of their time crumpled up inside Caroline Gough’s stripy suitcase, have been travelling with Caroline since she left the UK last November.

One of Caroline’s summer dresses explained: “As a summer garment, I am used to spending the majority of my time hanging in the wardrobe back in Shillingstone. I do get taken out and worn sometimes during the summer months, and I am usually chosen to go on a 2 week holiday to Lanzarote in the October half term, so I am more used to travelling on planes than a lot of these other clothes.”

A turquoise T-shirt added “I am Caroline’s favourite colour and also very versatile so I tend to leave the wardrobe fairly frequently throughout the year. But I am always hung back up again after she has finished with me, or at least I was until this trip began. Now we spend all our days shoved inside the stripy case.”

The jeans explained “Back in England Caroline wears me all the time, but in Australia it was so hot she barely even looked at me. In fact she put me right at the bottom of the case so that I would be out the way. It was okay for a while but as she spends longer on her travels, she buys more things and soon we won’t be able to breath inside that stripy case.”

However after three and a half weeks of hardcore backpacking around New Zealand’s South Island, Caroline has stopped for a few days at an airbnb with a proper wardrobe.

“We are all so relieved,” explained the lovely white and blue blouse who knows it won’t be getting another outing until Caroline stays at a place with an iron. “Just to sit on a hanger and shake myself out for a few days is pure heaven. We know it won’t last forever but we shall relish it whilst we can.”

The thermal top added “Caroline bought me in Queenstown so I am quite new and this is my first experience of living in a wardrobe. To be honest, I haven’t found the other clothes to be particularly friendly. I think they’ve realised that at some point there isn’t going to be enough room in that case for all of us and they’re worrying about who’s going to get rejected.”

The cardigan that thinks it’s a rug said “There’s no way that thermal top will be coming back to England with us. It’s obvious that Caroline will be ditching it at the nearest charity shop as soon as we get back to Australia. There’s no point making friends with it.”