In October I wrote a story about a car journey. You’ll remember if you read it because it no doubt gave you ever lasting images of me driving to Exeter airport in the middle of the night, vomiting the contents of what had once been a delicious lasagne all over myself and my car, and then having to leave the car sitting in sick juice at the airport for a week whilst I did a quick change in the mother and baby cubicle and then jetted off to Lanzarote wondering why when you’ve been sick it always makes your hair smell of parmesan cheese.

The entire incident has come back to bite me because on Friday I presented my car for its MOT. It went in at 8am, the idea being that it would be finished by 9 and I’d be in the sea by 10. It was after all the hottest August day on record since 2003.

No such luck. Sickgate had landed. I don’t usually introduce myself as “Caroline with the Renault Clio” but that became my name for the day during my frequent telephone conversations with the people at the garage. I was finally reunited with my car at 6pm after paying out the hefty sum of £582.08. 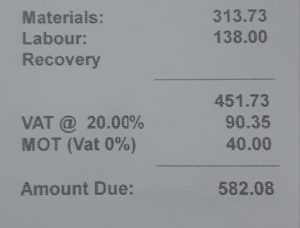 Why so much money? What could my faithful Tempest Blue possibly have done to accrue such a bill? Especially as she had been treated to three beautiful new tyres just last month.

Well it wasn’t her. It was me. Although I took the sick drenched car to the nearest valet place as soon as I landed back in England last October, what I didn’t realise was that the sick had seeped into a secure unit behind the steering wheel, and has steadily been corroding all the mechanisms for the last ten months.

The mechanic enthusiastically held up the two innards that he had taken out of the secure unit. “This is what was in your car,” he said cheerfully. I think I was supposed to notice the rust and corrosion but all I could do was stare in horror at the pieces of stale sick that were clearly welded to both parts.

There was a lot of mechanic speak, which I would struggle to understand in usual circumstances, but even less so with thoughts of sickgate whirling through my head. It was about then that it dawned on me that if I’d simply had a spare plastic bag in the glove compartment last October, I wouldn’t now be about to hand over the cost of, ironically, another week in Lanzarote to pay for the damage.

My car had obviously sparked quite a bit of interest at the garage, because even though it was 6pm on a Friday and they should have been heading home to start their weekends, two other mechanics came over to join the conversation, they were all quite enthused by the issues my car had presented. Clearly they don’t see that many ten month old regurgitated lasagnes corroding the mechanisms of a Renault Clio.

We didn’t mention the sick but surely they realised it was there? The mechanic was waving the innards of the car around in quite an animated fashion, which wouldn’t necessarily be advisable if you knew they were covered in stale sick, but perhaps he was now immune to it after ten hours of working with my car, or wanted it to fly onto me seeing as I’d produced it in the first place.

When I got home and deciphered the bill, it was clear that the mechanics definitely knew about the sick:

Support – the therapy required by all the mechanics who had to encounter the sick.

But what is the moral of this story? Don’t eat a lasagne before you go on holiday? Always keep a sick bag in the glove compartment? If you throw up in your car make sure you trade it in before your next MOT is due?

Whilst writing this story, it occurred to me that I haven’t eaten a lasagne since Sickgate. It’s usually up there on my list of top ten favourite meals when eating out in Cazmania, but for the last ten months I don’t remember even seeing it on a restaurant menu. And lasagne is usually on every menu, at least it is at the pubs and restaurants that I go to. Presumably my subconscious has been blocking my mind from registering words like “lasagne” and “bechamel sauce” ever since the trauma of Sickgate.

But I can’t ignore it forever. And with the current trend of “Eating Out to Help Out”, maybe I should join in. It would certainly help me out to get money off a food bill after Friday’s unexpected expense. Perhaps I should go to a local restaurant and order the lasagne. I’m sure it will be delicious.

I would just have to make sure I didn’t get into a car for several hours afterwards.

If you have loved this story and can stomach some more tales of sick, you can find the original sickgate story “Why I’m not coming home” here:

Why I’m not coming home

13 thoughts on “The most expensive lasagne ever”