A fortieth birthday has been thrown into chaos amidst speculation that the birthday girl is in fact a year older than she believed herself to be.

Caroline Gough from Georgeham in North Devon grew up believing that she was born in 1981, however the recent discovery of a hospital bracelet has thrown some confusion onto the subject, as it looks as though the date has been amended. 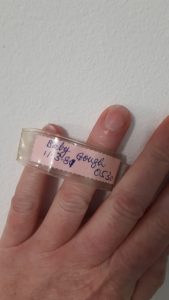 Caroline made the unexpected discovery in the loft during February half term.
“I used to spend my weekends and holidays enjoying theatre breaks, catching up with friends or going skiing,” she told us. “But thanks to the pandemic, I now spend my free time in the loft sorting through dusty unforgotten boxes.”

Caroline was surprised to find that she still owns her entire collection of maths exercise books from secondary school, and even more surprised to discover that she once understood how to solve a simultaneous equation and got 91% in a trigonometry test. But the hospital bracelet was the biggest discovery of the day.

“I’d understand if my birthday was on the 2nd or 3rd January, because people are still getting used to writing the new year,” she said. “But by the 11th March, you would think the year was old enough for midwives to remember to write it correctly.”

Caroline assumed she could quickly clear the matter up by What’sApping her mother, however she was somewhat baffled by her mother’s ambiguous response. 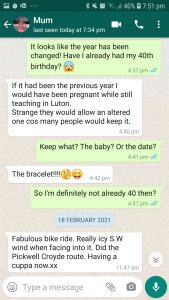 “She’s neither confirming nor denying that I was born in 1980 or 1981,” said Caroline. “Instead she is attempting to make me believe that it’s not possible to get pregnant whilst being a teacher in Luton, but I am sure that many people do.”

“If I am a year older than I thought, this means my entire life has been completely different to how it could have been. Should I contact my old PE teacher and tell her that every time the Under 14 netball team won a tournament, we should have been disqualified because one seventh of the players was actually 15? If I’d been in the right year group, would I have met the love of my life when our eyes met across a crowded Year 10 science lab? And as for passing my driving test, that’s a whole extra year I spent catching the last bus home at 10:23pm when my friends were still in the pub. Not that they would have even been my friends, because they would all have been in the year below.”

As parties are currently illegal in the UK, Caroline is not having a proper celebration. “I was disappointed at first,” she told us. “But now there’s the obvious relief that I’m not going to have to tell everyone that they need to go back to the shop and get balloons that say 41 instead of 40. I’ll be celebrating at home with Tinska the hamster and she hasn’t learnt to count yet, so it shouldn’t be an issue.”

10 thoughts on “Lockdown in the loft sparks birthday revelation”