A well spoken lady from Australia is of the mistaken belief that she is sharing her holiday accomodation with a bunch of criminals. 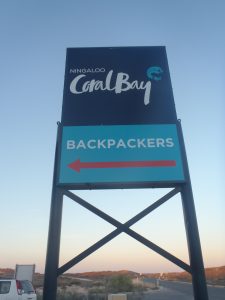 The female, who is booked into a private room at the Ningaloo Club in Coral Bay, has been openly horrified to discover that she is sharing bathroom and kitchen facilities with a number of backpackers.

Fellow guest Caroline Gough explained: “I first met her in the bathroom. It’s actually one of the nicer, cleaner bathrooms I’ve seen on my travels, but she was having some sort of meltdown about dust and remnants of other people’s toothpaste. It kind of reminded me of that Shakespeare scene where Lady Macbeth goes a bit crazy over a spot of blood.”

Caroline later encountered the lady in the kitchen. “She was just standing there, looking a bit shell shocked, opening and closing her mouth a bit like a goldfish. I said hello, but she was in too much of a state to hear me, so I just started putting my leftover food back into the fridge. This snapped the lady out of her trance and she said to me in her poshest voice: ‘Surely you’re not going to leave your things in there? Not with these sort of people around?’ ”

At this point Caroline, who enjoys speaking in a range of accents, decided to have a bit of fun. “I put on my best broad Yorkshire accent and asked the lady what sort of people she was talking about. The lady lowered her voice and said ‘you know…. backpackers’ as if it was the most vulgar word in existence in the English language.”

Caroline said “I went on to explain in Broad Yorkshire that I’ve been travelling for six months and I’ve never had nowt stolen. I used the old idiom about everyone being int same boat and so we all respect each other’s things. Then for good measure I added an ‘innit?’ on the end. The woman seemed slightly reassured by this but still looked at me like I had two heads.”

Caroline added “Later on I noticed that someone had helped themselves to some of my Coke which had been in one of the communal fridges. Obviously I didn’t tell the posh lady because that would fuel her argument that you can’t trust backpackers. Although it did occur to me that she could have been the one who had taken it.”