A British backpacker has spoken of her dismay after discovering she forgot to put any of her underwear into the washing machine this evening. 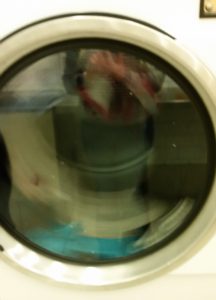 Caroline Gough who is currently staying at the Ocean Beach Backpackers in Cottesloe explained: “When you’re a backpacker you have to put a lot of thought and preparation into doing your laundry.

Firstly you’ll need to have at least eight dollars worth of coins to feed into the machines, because even though Australia is a hot country, most backpacking hostels lack clothes lines or drying space, so you’ll need to use the dryer as well.

Then you need to have a whole chunk of free time available to attend to your laundry. You don’t actually have to sit next to the washing machine watching it spin, but you do need to go back promptly when each cycle finishes, otherwise another backpacker wanting to use the machine will helpfully take all your wet clean clothes out of the machine and throw them onto the dirty dusty floor for you.”
Caroline has been wanting to do her washing for several days but had not had the opportunity until tonight. “Basically I needed to wash everything,” she said. “So I put on a mismatched outfit of skirt and T-shirt because they were the only things that didn’t need washing. I was a bit embarrassed to show my face at the hostel burger night wearing my bizarre combination of clothes,  however a Norwegian chef called Renate tried to hit on me, so she must have thought I looked okay.”
Caroline explained “By ten o’clock all my washing was clean and dry, and I was feeling pretty pleased with myself. When you’re backpacking, you can get ridiculously excited about little things, like having all your clothes available to wear again and washing your towel so that it no longer smells like the last hostel you stayed in. I took my clean laundry back to my room and that’s when I discovered all the knickers, sitting in a plastic bag waiting to be washed. I couldn’t believe it.”
Caroline said “I don’t have any clean knickers left for tomorrow, but I can’t summon up the time, the energy or the number of coins needed to go through the drama of putting on another load. I will just have to wear my bikinis as underwear until I can face the laundry room again.”
The knickers said: “We’ve been travelling with Caroline for six months now. Obviously back in Shillingstone there was quite a group of us, all taking turns to be worn, so we had quite a bit of free time in between. But when she announced she was coming travelling, only a few of us were invited to come along. We thought it would be exciting, but what we didn’t realise is that with so few of us here, and with us constantly moving on to a new place every few days, there’s little time for lounging about in a top drawer. We constantly get worn and washed and moved on to another place. We have seen the insides of washing machines and dryers all over Australia and New Zealand.”
The oldest pair of knickers said “I for one am glad we got a reprieve tonight. I’m sick of going for a spin every week. Shoving us in and out of these machines like she thinks we’re some kind of adrenaline junkies. Just because she likes adventure doesn’t mean the rest of us do.”

5 thoughts on “Backpacker’s dismay as knickers are overlooked”