Hoards of pedestrians attending the Vivid light display in Sydney have been demonstrating their road safety skills by waiting for the green man, despite all the roads being closed to vehicles for the duration of the evening.

This is the tenth year that Vivid has lit up the skies of Sydney, and with so many people flocking to Circular Quay to see the iconic Sydney Harbour Bridge and Opera House light up, all surrounding roads are closed to vehicles each evening at 5pm and do not reopen until midnight.

Nevertheless hundreds of Australians and international tourists demonstrated that none of them were prepared to go and see the spectacular lights of Vivid until they had first seen that everyday green light lead them safely across the road at a series of zebra crossings close to Circular Quay.

Caroline Gough who was attending Vivid for the first time said “At first, you automatically follow the crowd, and when they all stop at the zebra crossing, so do you. But then it dawned on me that the roads were clear all of the time, so I’m not sure exactly what we were waiting for. If there were lots of parents and children around I’d understand them wanting to practise waiting for the green man, but these were hoards of adults, and there were so many of us streaming towards Circular Quay that we barely all fitted onto the pavement.”

As a visitor to the country Caroline felt unsure about being the one to break the rules and cross the road without waiting for the green man. “I did it once,” she said “and looked over my shoulder to see if anyone was going to follow me, but nobody did.” 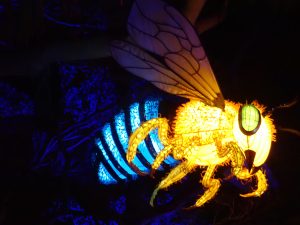 Caroline spent several hours enjoying the Vivid light display both at Circular Quay and the following evening at Taronga Zoo. “The animals at the zoo were very bright and very large,” she said. “I suspect they may have had some extra E numbers added to their daily feed.” 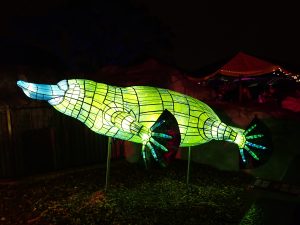 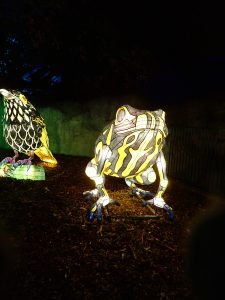