A British backpacker is blaming technology for interfering with her ability to respond appropriately to that age old question “how did you sleep?”

Caroline Gough who is currently travelling around Australia explained “I recently discovered that if I wear my Fitbit at night it records everything I didn’t know I needed to know about my sleep patterns. It tells me not just how long I slept for but also how long I spent in each sleep stage. And there are colourful charts too, to help those sleepers who are visual learners.”

However whilst Caroline is enjoying the novelty of exploring the statistics of her slumber, it has created a dilemma when responding to people who ask her how she has slept.

“I am now in the position of being able to give them a much more accurate answer,” Caroline told us. “Like ‘seven hours forty- seven minutes’, or ‘quite well apart from being inexplicably awake for 23 minutes at 5:17am’. But I’m not sure that people are looking for that sort of detail.” 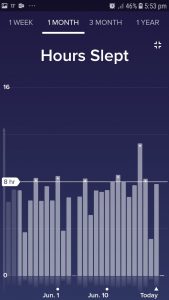 Caroline who studied sociolinguistics as part of her degree said “To be honest even before this advance in technology, when someone asks how you slept, you’re generally expected to say ‘fine’ regardless of what the truth actually is. It’s likely that the person asking will have contributed to your night in some way. They might be the host who provided the bedroom you slept in, or they may have shared a backpacker dormitory with you. So you have to say that you slept well even if you didn’t, because people get ever so upset if you admit that their snoring kept you awake or that you spent the night wide awake in their expensive king size guest bed and even your fail-proof method of boring yourself to sleep by reciting an alphabetical list of the London Underground stations didn’t work.”

Caroline continued “it’s the same when people ask if you’d like to see a thousand photos from their recent holiday or if you want to hear about the dream they had last night. They’re not actually asking you a question, they are using a question to tell you what’s going to happen next.

“Similarly when people ask you how you are,” said Caroline. “You’re supposed to say that you’re fine thanks, even if you’re grieving the loss of your grandfather and have just been diagnosed with colitis. I tried deviating from the script once and it really doesn’t work.”

Caroline is currently on Magnetic Island in Queensland where she is sharing an eight bed dormitory with seven females from Sweden, the Netherlands and Germany. “One of them mutters in her sleep. I don’t know what she is saying because I can’t speak Swedish, but it sounds very dark and profound. Another has shown me two hundred and seventy-nine photographs of the Vivid light display in Sydney, which really wasn’t necessary because I saw it myself last week and have a similar set of photos on my own camera. Another has been doing some very angry German shouting at her boyfriend on Facetime each night and always wakes up in the morning with sad puffy eyes after some loud early morning sobbing into her pillow. Nevertheless we all tell each other that we slept well and that we’re fine thanks, before smiling and nodding with fake enthusiasm as we’re forced to look at photos we really don’t need to see.”